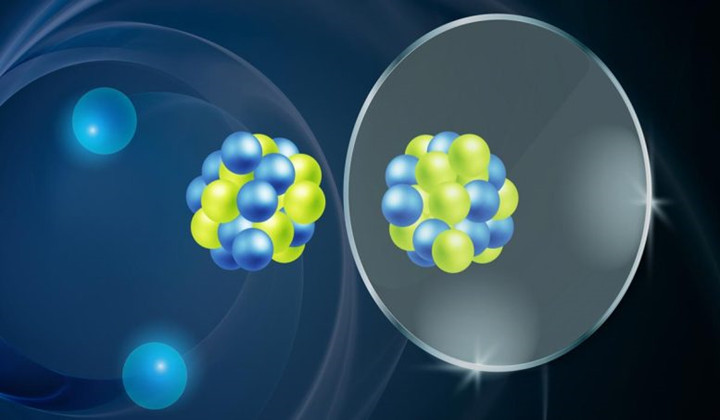 Theory and experiments developed at Michigan State use ‘mirror nuclei’ to probe fundamental physics of atoms and neutron stars.

About 20 years ago, Michigan State University’s B. Alex Brown had an idea to reveal insights about a fundamental but enigmatic force at work in some of the most extreme environments in the universe.

These environments include an atom’s nucleus and celestial bodies known as neutron stars, both of which are among the densest objects known to humanity. For comparison, matching the density of a neutron star would require squeezing all the Earth’s mass into a space about the size of Spartan Stadium.

Brown’s theory laid the blueprints for connecting the properties of nuclei to neutron stars, but building that bridge with experiments would be challenging. It would take years and the unique capabilities of the Thomas Jefferson National Accelerator Facility. The facility, also known as Jefferson Lab, is a U.S. Department of Energy Office of Science, or DOE-SC, national laboratory in Virginia. So experimentalists got to work on a decades-long series of studies and Brown largely returned to his other projects.

That is, until 2017. That’s when he said he started thinking about the beautiful precision experiments run by his colleague Kei Minamisono’s group at the National Superconducting Cyclotron Laboratory, or NSCL, and in the near-future at the Facility for Rare Isotope Beams, or FRIB. FRIB is a DOE-SC user facility at MSU that will start scientific user operation in early 2022.

“It’s amazing how new ideas come to you,” said Brown, a professor of physics at FRIB and in MSU’s Department of Physics and Astronomy.

The goal of this new idea was the same as his earlier theory, but it could be tested using what are known as “mirror nuclei” to provide a faster and simpler path to that destination.

In fact, on October 29, 2021, the team published a paper in the journal Physical Review Letters based on data from an experiment that took a few days to run. This comes on the heels of new data from the Jefferson Lab experiments that took years to acquire.

To be clear, the experiments in Michigan and Virginia are not competing. Rather, Krishna Kumar, a member and past chair of the Jefferson Lab Users Organization, called the experiments “wonderfully complementary.”

“A detailed comparison of these measurements will allow us to test our assumptions and increase the robustness of connecting the physics of the very small — nuclei — to the physics of the very large — neutron stars,” said Kumar, who is also the Gluckstern Professor of Physics at the University of Massachusetts Amherst. “The progress made in both experiment and theory on this broad topic underscores the importance and uniqueness of the capabilities of Jefferson Lab and NSCL, and the future will bring more such examples as new measurements are carried out at FRIB.”

A mirror to examine the neutron skin

One of the ironies here is that Brown hasn’t spent a lot of his time working on the two theories central to this story. Brown has published more than 800 scientific papers during his career, and the ones that inspired the experiments at NSCL and Jefferson Lab are distinct from his other work.

“I work on many things and these are very isolated papers,” Brown said. Despite that, Brown shared them quickly. “I wrote both papers in a couple months.”

When Brown completed the draft of his 2017 theory, he immediately shared it with Minamisono.

“I remember I was at a conference when I got the email from Alex,” said Minamisono, a senior physicist at FRIB. “I was so excited when I read that paper.”

The excitement came from Minamisono’s knowledge that his team could lead the experiments to test the paper’s ideas and from the theory’s implications for the cosmos.

“This connects to neutron stars and that is so exciting as an experimentalist,” Minamisono said.

Neutron stars are more massive than our sun, yet they’re only about as big as Manhattan Island. Researchers can make accurate measurements for the mass of neutron stars, but getting exact numbers for their diameters is challenging.

A better understanding of the push and pull of forces inside neutron stars would improve these size estimates, which is where nuclear physics comes in.

A neutron star is born when a very large star becomes a supernova and explodes, leaving behind a core that is still more massive than our sun. The gravity of this massive leftover causes it to collapse on itself. As it collapses, the star also begins converting its matter — the stuff that makes it up — into neutrons. Hence, “neutron star.”

There’s a force between the neutrons, known as the strong interaction, that works against gravity and helps puts the brakes on the collapse. This force is also in action in atomic nuclei, which are made up of neutrons and particles known as protons.

“We know gravity, of course. There’s no issue there,” Brown said. “But we’re not so sure about what the strong interaction is for pure neutrons. There’s no laboratory on the Earth that has pure neutrons, so we make inferences from things we see in nuclei that have both protons and neutrons.”

In atomic nuclei, the neutrons stick out a teensy bit, forming a thin, neutron-only layer that extends beyond the protons. This is called the neutron skin. Measuring the neutron skin enables researchers to learn about the strong force and, by extension, neutron stars.

In the Jefferson Lab experiments, researchers sent electrons hurtling at lead and calcium nuclei. Based on how the electrons scatter or deflect from the nuclei, scientists could calculate upper and lower limits for the size of the neutron skin.

For the NSCL experiments, the team needed to measure how much room the protons take up in a specific nickel nucleus. This is called the charge radius. In particular, the team examined the charge radius for nickel-54, a nickel nuclei or isotope with 26 neutrons. (All nickel isotopes have 28 protons, and those with 26 neutrons are called nickel-54 because the two numbers add up to 54.)

What’s special about nickel-54 is that scientists already know the charge radius of its mirror nucleus, iron-54, an iron nucleus with 26 protons and 28 neutrons.

“One nucleus has 28 protons and 26 neutrons. For the other, it’s flipped,” said Skyy Pineda, a lead author on the new research paper and a graduate student researcher on Minamisono’s team. By subtracting the charge radii, the researchers effectively remove the protons and are left with that thin neutron layer.

“If you take the difference of the charge radii of the two nuclei, the result is the neutron skin,” Pineda said.

To measure the charge radius of nickel-54, the team turned to its Beam Cooler and Laser Spectroscopy facility, abbreviated BECOLA. Using BECOLA, experimentalists overlap a beam of nickel-54 isotopes with a beam of laser light. Based on how the light interacts with the isotope beam, the Spartans can measure the nickel’s charge radius, Pineda said.

Using Brown’s earlier theory, Jefferson Lab scientists needed on the order of a sextillion electrons for a measurement, or a trillion billion particles. Using the new theory, researchers instead need thousands, maybe millions of nuclei. That means that measurements that once required years can be replaced with experiments that take days.

A future of discovery built on a history of teamwork

This new research feels like the passing of a baton in a couple of ways. For one, the Jefferson Lab experiments are entering their final phase, while FRIB stands poised to continue the exploration.

FRIB itself represents another leg of the relay. BECOLA started running at NSCL and will continue operating at FRIB.

Each leg builds on the last and on the collective work the runners have put in together.

Again, that formula is nothing new. It’s what enabled a theorist at NSCL to inspire and inform experiments at a world-class lab in Virginia. What stands out about NSCL and FRIB, however, is that the user facilities are connected to a university, letting veterans and the next generation of leaders interact and share ideas that much sooner.

“MSU is unique in having had NSCL and now FRIB. In most cases, labs like these aren’t integrated into a university campus,” said Kristian Koenig, a postdoctoral researcher on Minamisono’s team and a co-lead author on the new paper. “It gives everyone here a great opportunity.”