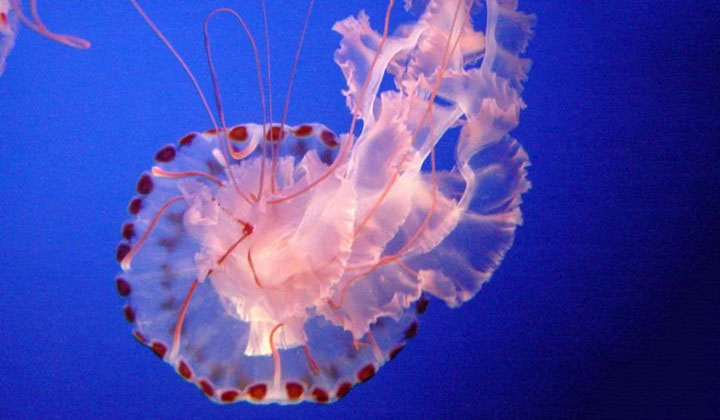 Strictly speaking, jellyfish are not fish. But they live in a sea like fish and look like jelly. So these two words stuck in a single name. Also, jellyfish do not have brains. They do not have a heart or lungs, too.

People often look for strange animals in the depths of the ocean or in the most remote corners of the earth. But jellyfish, those bizarre creatures, can be encountered by anyone. How can they be alive when they do not have any of the organs that are the most important to us, humans?

From the zoological perspective, jellyfish are related to hydra, sea anemones, sea pens, and corals. They are free-swimming marine animals that have distinct umbrella-shaped top parts of their bodies followed by trailing tentacles. Some of them also live anchored to the seabed.

But why do jellyfish have this surprisingly simple anatomical structure?

Modern jellyfish do have separate organs. Below their umbrella-shaped bell that appears hollow to the outside observer is a transparent jelly-like matter called mesoglea. This structure is the basis of the hydrostatic skeleton of this animal. 95% and even more of the mesoglea consists of water. The rest 5% mainly consists of proteins.

In fact, jellyfish are one of the oldest groups of animals. Scientists have found fossils of jellyfish-like animals that appear to be between 635 and 577 million years old. It is not known exactly whether these animals are true ancestors of modern jellyfish. Still, it is assumed that jellyfish existed for at least 500 million years and possibly even 700 million years or more.

Since then, jellyfish appear to have not changed much, and they still look much like their ancient relatives with a very simple anatomical structure.

So where are the organs of a jellyfish located?

It is true that jellyfish do not have brains or a heart. But they have a simple system of nerves forming a radial net through their body, in different layers. While appearing relatively simple, these nerves perform various functions: they can sense light, gravity, temperature, and different chemical compounds.

Jellyfish also have nematocysts – explosive cells containing a specialized organelle. This organelle packs a coiled hollow tubule structure filled with venom. When triggered, this tubule is ejected and penetrates the prey. Nematocysts are mostly located on tentacles.

Jellyfish do not have a respiratory system. And they do not need it, because a sufficient amount of oxygen is absorbed through their top layer called the epidermis.

Although they do not have brains and no central nervous system, the nerve net inside their bodies could be considered as a basis of a rudimentary nervous system. This net controls bodily functions of jellyfish, such as detection of stimuli (for example, presence of light, levels of salinity), the transmission of signals, and control of swimming mechanics.