Breakthrough Boost for Solar-Powered Fuel Made by Splitting Water Mar 05, 2021 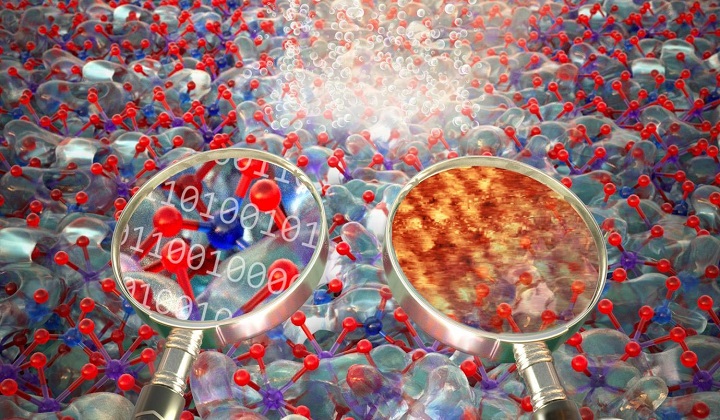 Hydrogen is an incredibly powerful fuel, and the ingredients are everywhere—in plain old water. Researchers would love to be able to use it widely as a clean and sustainable energy source.

One catch, however, is that a considerable amount of energy is required to split water and make hydrogen. Thus scientists have been working on fabricating materials for photoelectrodes that can use solar energy to split water, creating a “solar fuel” that can be stored for later use.

Scientists with the University of Chicago, the University of Wisconsin–Madison and Brookhaven National Laboratory published a new breakthrough in making such photoelectrodes. Their research, reported in Nature Energy on February 18, 2021, demonstrates that modifying the topmost layer of atoms on the surface of electrodes can significantly boost their performance.

“Our results are crucial for both understanding and improving photoelectrodes used in solar fuel production,” said Giulia Galli, the Liew Family Professor of Molecular Engineering and Professor of Chemistry at UChicago, senior scientist at Argonne National Laboratory and co-corresponding author of the paper.

“Each improvement we make brings us closer to the promise of a sustainable future fuel,” added co-corresponding author Kyoung-Shin Choi, Professor of Chemistry at the University of Wisconsin–Madison.

Galli and Choi are theoretical and experimental leaders in the field of solar fuels, respectively, and have been collaborating for several years to design and optimize photoelectrodes for producing solar fuels. To understand the effects of the surface composition of electrodes, they teamed up with UChicago alum Mingzhao Liu, MS’03, PhD’07, a staff scientist with the Center for Functional Nanomaterials at Brookhaven National Laboratory.

A photoelectrode works by absorbing energy from sunlight, which generates an electrical potential and current that can split water into oxygen and hydrogen.

The team investigated a photoelectrode material called bismuth vanadate, which is promising because it strongly absorbs sunlight across a range of wavelengths and remains relatively stable in water. In particular, they wanted to investigate the electrode surface. “The properties of the bulk materials have been extensively studied; however, the impact of the surface on water splitting has been challenging to establish,” explained Liu, a co-corresponding author of the paper.

At Brookhaven, Liu and graduate student Chenyu Zhou had perfected a method for growing bismuth vanadate as a photoelectrode with a well-defined orientation and surface structure. “However,” Zhou said, “we knew that our photoelectrode had slightly more vanadium than bismuth on the surface.” The group wanted to know if a more bismuth-rich version would have better performance.

At UW–Madison, Choi and graduate student Dongho Lee found a way to change the surface composition without altering the makeup of the rest of the electrode, and they fabricated a sample with more bismuth atoms on the surface.

To understand on a molecular level what was happening, the two different surface compositions were examined using special instruments at the Center for Functional Nanomaterials, including scanning tunneling microscopy. Wennie Wang, a postdoctoral scholar in the Galli group, compared experimental and simulated microscopy images and identified the surface structure models that closely mimicked the experimental samples.

“Our quantum mechanical calculations provided a wealth of information, including the electronic properties of the surface and the exact positions of the atoms,” said Wang. “This information turned out to be critical to interpret experiments.”

Next, the team compared what happened when light struck the surfaces. They found that surfaces with an excess of bismuth atoms are more favorable for water splitting reactions.

“When bismuth vanadate absorbs light, it generates electrons and electron vacancies called holes,” said Lee. “What we found is that the bismuth-terminated surface lifts the electrons to higher energy and also leads to more efficient separation of electrons from holes—overall, having more bismuth atoms on the surface favors water splitting reactions.”

“Our tightly integrated experimental and theoretical investigations were vital in gaining an atomic level understanding of how the surface modification can change the properties of a photoelectrode,” said Choi.

“Our collaboration funded by the National Science Foundation has been extremely fruitful,” added Galli.

Next the researchers will explore how bismuth vanadate photoelectrodes interact with a catalyst layer that is applied on top of the photoelectrode surface to facilitate water oxidation.

“We believe the results obtained from our study will serve as an essential foundation for future studies,” said Liu.

“We identified an important piece of the complex puzzle of water splitting, and we’re looking forward to continuing to explore ways to improve solar fuel production as a sustainable alternative to fossil fuels,” added Galli.

This work was funded by the National Science Foundation and used computational resources of the University of Chicago’s Research Computing Center. The work at Brookhaven was carried out in the Materials Synthesis and Characterization and Proximal Probes User Facilities and funded by the Department of Energy’s Office of Science.