Disabling one protein might one day lead to a cure for the common cold Jan 08, 2020 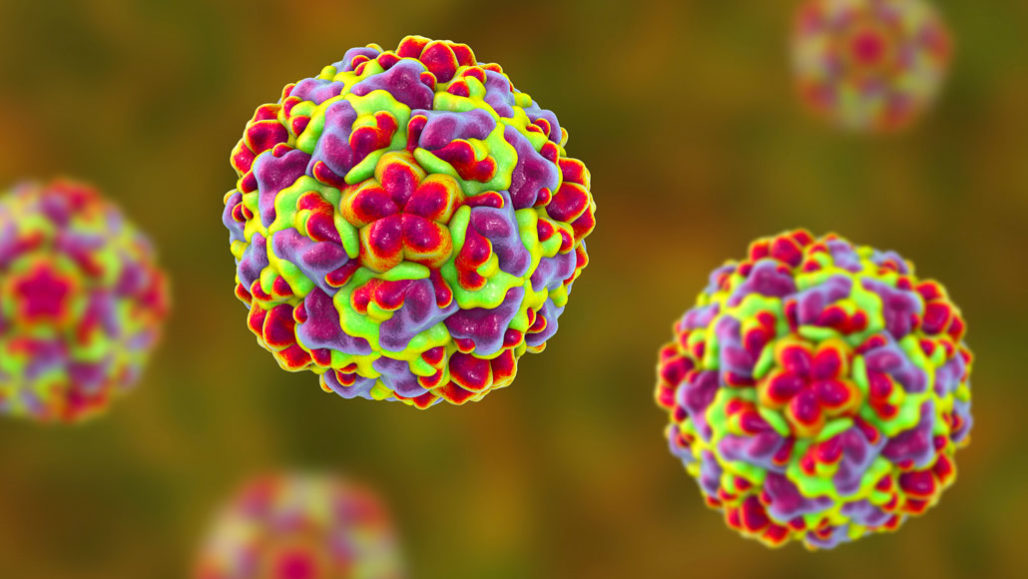 An uncommon way of thinking may be bringing scientists one step closer to a cure for the common cold.

Researchers have identified a key protein in humans that some viruses use to multiply inside of human cells. Disabling that protein, instead of attacking the virus itself, may prevent infections from spreading. In mice and human cells engineered to lack this protein, the viruses couldn’t replicate, Jan Carette, a microbiologist at Stanford University School of Medicine, and colleagues report September 16 in Nature Microbiology.

“It’s not quite a cure for the common cold, but it’s an interesting step forward,” says Ellen Foxman, an immunologist at Yale School of Medicine who was not involved in the study.

Colds are the most common infectious disease in humans. On average, adults catch a cold two or three times each year, while children get the sniffles even more often (SN: 2/12/09). Any one of a few hundred viruses, including rhinoviruses, can cause these infections. That fact ­— and because these viruses can mutate quickly to become resistant to drugs — makes it difficult to find a cure.

So researchers at Stanford and the University of California, San Francisco focused on the human host rather than the virus. Viruses hijack cells and rely on humans’ own cellular machinery to make more virus and sicken their host. The team wanted to see if it could identify human genes that make the proteins that many viruses hijack in order to replicate.

Using the gene-editing tool CRISPR, Carette and colleagues systematically deleted chunks of DNA to build a library of human cells, each missing one gene and therefore unable to make that gene’s corresponding protein. The researchers then infected the cells with two types of viruses, one that causes colds and another that has been linked to neurological diseases.

Using different viral proteins like hooks, the scientists pulled out human proteins that were physically attached to a viral protein. That let the team identify which human proteins were interacting with viral ones — an indication that the virus was using that protein to hijack the cell.

One human protein was repeatedly fished out of the cells: SETD3. And experiments indicated that the viruses needed SETD3 to take over the cell. Scientists knew this protein could affect actin proteins, which help muscles contract. But its role in viral infections came as a surprise.

When the researchers injected viruses into mice engineered to lack a working version of the SETD3 gene, the mice didn’t get sick. Human lung cells that also lacked the gene remained healthy. (Lung cells are often used in these types of studies because they are especially susceptible to many rhinoviruses that cause colds.)

Repeating those experiments with similar but potentially more serious viruses suggested the approach may be effective against more than just the common cold. Engineered human cells didn’t become infected when they were exposed to viruses that cause hand, foot and mouth disease and a polio-like spinal cord disease called acute flaccid myelitis. And when mice were exposed to these viruses, the rodents that didn’t have a functioning version of SETD3 were much more likely to survive than those that had the working gene.

“We have identified an excellent target,” says Carette, of SETD3. But it’s unclear whether disabling that gene and its protein could cause other problems. While the engineered mice survived and were healthy and fertile, they weren’t able to push their pups out of the womb during birth, he says, which might be related to the protein’s role in muscle contractions.

Scientists don’t fully understand what this gene does in the human body, and getting rid of it completely could have unknown effects, says Vincent Racaniello, a virologist at Columbia University who wasn’t involved in the work. “The authors show that mice lacking the gene for SETD3 are viable and resistant to infection. However, this observation does not mean that SETD3 in humans is dispensable,” he wrote in an e-mail.

Instead, the researchers think their best bet is to search for a drug that blocks the human protein and its viral counterparts from interacting, or one that destroys the human protein only when it is interacting with viral ones. But those types of drugs are still a long way off. “The question is always ‘When can I buy it over the counter?’ ” Carette says. “Drug development takes time.”