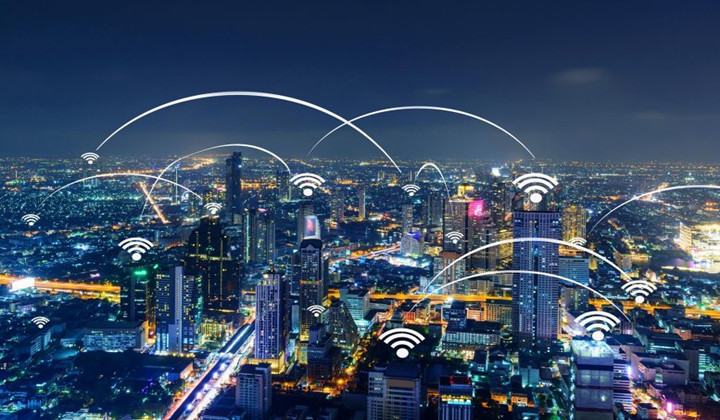 If service becomes slow when you’re trying to send a quick email on your smartphone, you might scroll through your network options and discover how many Wi-Fi networks there are. In fact, this plethora of options is itself the problem. These networks are in competition with one another, limiting the speed at which each can operate.

University of Chicago researchers have demonstrated how this increased network competition could negatively impact internet service for everyday users.

Competition between networks arises when they operate on shared spectrum bands, or frequency ranges for electromagnetic waves. In particular, Wi-Fi utilizes a spectrum that is “unlicensed,” meaning any device or network can utilize this spectrum as long as certain transmission rules mandated by the Federal Communications Commission (FCC) are followed.

“The unlicensed spectrum is literally a free-for-all; anybody can use it, within the bounds set by FCC,” explained Monisha Ghosh, associate member in the Department of Computer Science at the University of Chicago and research professor in the Pritzker School of Molecular Engineering.

Cellular phone service mostly relies on an entirely separate band of spectra, which providers license from the FCC through spectrum auctions, though that has shifted with the growing demand for cellular data and limited bandwidths.

When a cellular provider, such as T-Mobile or AT&T, licenses a spectrum band from the FCC, they reserve its exclusive use. As a result, networks operating on licensed bands experience little interference. This allows providers to establish fast and reliable service, but it comes at a cost.

“In the last five years, the cellular world has grown in its number of users and the amount of data they need,” Ghosh said. “Cellular service providers have begun running short on spectrum, and the licensed spectrum costs billions.”

To improve bandwidth without breaking the bank, these providers have begun to also use the unlicensed spectrum via cellular networks using a mode called licensed assisted access (LAA), which operates on the same bands used for Wi-Fi. Ghosh’s group set out to examine how this shared use of the unlicensed spectrum, called coexistence, impacted both Wi-Fi and cellular users.

“We actually found an LAA station located on the UChicago campus, on a pole in front of the bookstore, and in this outside space campus Wi-Fi is also in use,” Ghosh said. “That provided an experimental platform in our backyard, so we started taking measurements.”

Sitting on a bench outside the bookstore, computer science graduate student Muhammad Rochman and postdoctoral researcher Vanlin Sathya set up five laptops and smartphones, and used these to access the local Wi-Fi networks or connect to LAA using cellular data. They also accessed different types of data to vary the demand on these networks, from low (such as accessing text on a website) to high (streaming a video). Each device was equipped with applications that allowed the group to measure the quality of each network connection.

By accessing multiple networks simultaneously, the group found that competition decreased performance—reducing the amount of data transmitted, the speed of transmission, and the signal quality.

This competition was particularly detrimental to Wi-Fi. When LAA was also in active use, data transmitted by Wi-Fi users decreased up to 97%. Conversely, LAA data only exhibited a 35% decrease when Wi-FI was also in use.

Ghosh explained that the incompatibility between Wi-Fi and LAA owes in part to the different protocols each employs to deal with heavy internet traffic.

“If everybody starts using the spectrum at the same time, it creates interference and no one’s information gets through,” Ghosh said. “But Wi-Fi and cellular have developed very different mechanisms for dealing with this issue.”

Because Wi-Fi depends exclusively on unlicensed spectra, it uses a protocol tailored towards unpredictable demand. This protocol, called listen-before-talk, mimics the interactions of a group of polite party-goers. Participants listen and wait for a gap in the conversation to speak. If two people start talking at once, one politely backs off to let the other speak, then chimes in afterwards. Similarly, if multiple Wi-Fi users attempt to access the network at once, each is assigned a brief wait time, and randomness among these wait times reduces the probability of collision.

In contrast, cellular providers can predict demand based on cellular access, and so assign each user a specific transmission time. Thus, LAA users are more like speakers in a tightly scheduled colloquia than at an informal party.

This difference in protocols posed little problem when cellular providers were restricted to licensed spectra, but as they’ve moved to the unlicensed spectra, the channel access parameters LAA employs makes it difficult for Wi-Fi users to get equal access to the medium. In spite of the fact that LAA recently modified the tight scheduling used in cellular bands to implement listen-before-talk, it still operates with different parameters. One crucial difference is how long each system holds the medium once it gains access: LAA can transmit for up to 10 milliseconds, whereas Wi-Fi transmissions are only up to 4 milliseconds long.

Competition in the shared spectrum occurs not just between Wi-Fi and cellular providers, but also within each network type.

In future studies, she hopes to also examine how LAA networks supplied by different cellular providers compete with one another.

Additionally, Ghosh has advised regulatory agencies on how to better align network protocols based on her research.

“These changes have resulted in better coexistence and better sharing mechanisms. But there’s still a long way to go,” she said.