Collapse May Not Always Be Inevitable for Marine Ice Cliffs Jul 30, 2021 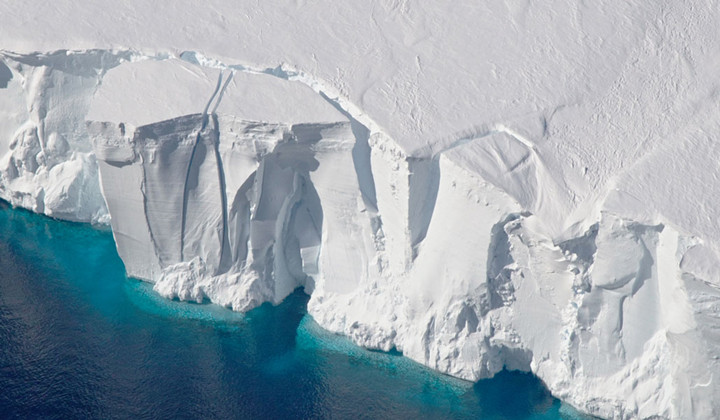 When it comes to global warming and sea level rise, scientists have made some dire predictions. One of the most calamitous involves the widespread collapse of ice cliffs along the edges of Greenland and Antarctica, which could raise sea level as much as 4 meters by 2200 (SN: 2/6/19). Now, new simulations suggest that massive glaciers flowing into the sea may not be as vulnerable to such collapses as once believed.

One hypothesis that projected calamitous sea level rise is called the marine ice cliff instability. It suggests that sea-facing bluffs of ice more than 100 meters tall will fail and then slough off to expose fresh ice. Those new cliffs will in turn disintegrate, fall into the sea and float away, setting off a relatively rapid retreat of the glacier that boosts sea level rise.

Although discussed for years, the phenomenon hasn’t yet been seen in today’s glaciers, says Jeremy Bassis, a glaciologist at the University of Michigan in Ann Arbor. “But that may not be surprising, due to the relatively short record of observations in the field and by satellites,” he says.

Because of the dearth of field data, Bassis and colleagues decided to use computer simulations to explore ice-cliff behavior. Unlike previous models, the researchers’ simulations considered how ice flows under pressure as well as how it fractures when highly stressed. This blended model is “a pioneering composite,” says Nicholas Golledge, a glaciologist at the Victoria University of Wellington in New Zealand, who wasn’t involved in the study.

First, the researchers simulated the collapse of a 135-meter-tall ice cliff on dry land. Over a virtual period of weeks, the face of the cliff shattered and then slumped down to the base, where the icy rubble helped buttress the cliff against further collapse. Researchers have often seen this result in the field, Bassis says.

Then, the team simulated a 400-meter-tall glacier flowing into water that was 290 meters deep. These dimensions are typical of some of the massive glaciers in Greenland flowing into deep fjords, Bassis says. When the cybercliff collapsed, ice that fell into the water at the cliff’s base floated away, leading to repeated failures and rapid, runaway collapse of the glacier. But adding even a small amount of back pressure at the base of the cliff — as would happen if icebergs got stuck and couldn’t waft away, or if they froze in place — prevented a runaway collapse, Bassis and his team reports in the June 18 Science. “We didn’t expect this to be the case,” Bassis says. “But if small bergs got stuck in the shallows ahead of the ice cliff, it was enough to buttress the [cliff] face,” he says.

Simulations of an 800-meter-tall glacier flowing into 690 meters of water, comparable to the dimensions of the Thwaites and Pine Island glaciers in Antarctica, yielded similar results. The researchers also found that in relatively warm ambient temperatures, ice flow upstream of the cliff thins the glacier and reduces the height of the cliff, thus reducing the likelihood of runaway collapses.

The team’s simulations “capture what I think of as realistic behavior,” says Golledge, who coauthored a commentary on the study in the same issue of Science. Future fieldwork may help validate the group’s results. If the simulations hold, Golledge says, the less dire results may mean slower sea level rise in the short term than otherwise predicted.

Bassis and his colleagues’ analysis “is an important piece of work,” says Ted Scambos, a glaciologist at the University of Colorado Boulder, who was not involved in the study. The results, he says, “provide a balance between the possibilities for extreme runaway collapse and some that are more realistic.”